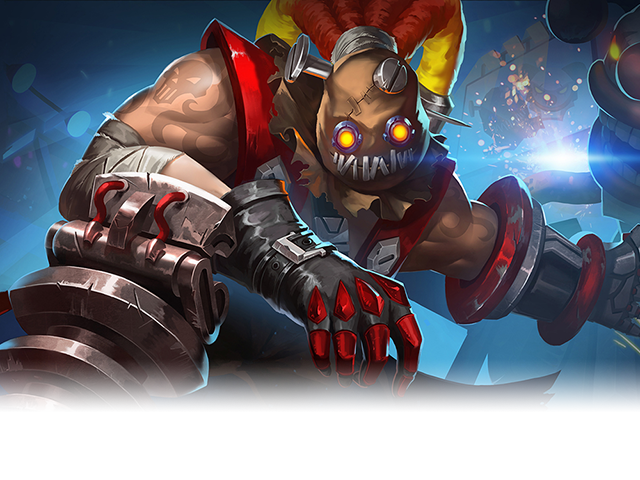 Before being hit by a shell, Moreau used to be a wary and calm commander. "Calm down, gentlemen" was his pet phrase. After he received mechanical transformation over the whole body, not only was his combat ability improved hundreds of times, but his personality changed significantly.

Now Moreau likes talking to himself while fiddling with his “toys”, the artillery. Everyone feels sorry for him as they expected this mad guy to become the next Napoleone.

Moreau himself, however, has a different opinion. He feels much easier as he doesn’t have to take care of everyone in the troops. All that he needs to think about now is killing his enemies with the artillery.

Hand-held cannon accumulates heat during combat (via normal attacks or skills), each point of heat increase attack speed by 0.5%. When out of combat (not attacking or using skills for 2 seconds), reduce heat by 5 each second. Activiate Carnage when heat reaches maximum, maintains attack speed bonus, and allow spending heat to improve [Spray and Pray] and [Hot Rocket], for 5 seconds. When Carnage finishes, all heat is dissipated over 4 seconds, during that time heat cannot accumulate heat again.

Hold down the skill button to use. Reduce movement speed by 30%, shoot in a fan pattern in the direction the character is facing, shots will cause 30/38/46/54/62/70(+0.22ap) damage to first enemy touched. During skill activation, increase heat by 5 every 0.5 seconds. If Carnage is active: increase damage by 30%, cost 20 heat per second, and greatly increase shots count.

Immediately gain 25 heat, shoot one powerful rocket and get pushed back by its recoil. The rocket explode upon reaching maximum distance or when in contact with an enemy, cause 140+0.9ap damage in a cone. When triggering Carnage with Hot Rocket, reduce Hot Rocket's cooldown by 50%. If Carnage is active: After using up 50 heat, rocket also causes stun for 1 second. After using up 100 heat, rocket also causes 1.5 seconds stun and ignore armor.

Can only be used while Carnage is active. Ignite hand-held cannon, shoot countless blanketing firework towards the sky, continuously bombard target location for the next 4 seconds, causing 20+0.2ap damage and 30% slow (lasts 0.5 seconds). Multiple firework hits deal 50% after the first, each enemy may be hit for a total of 3 times during each wave of firework (total of 5 waves).