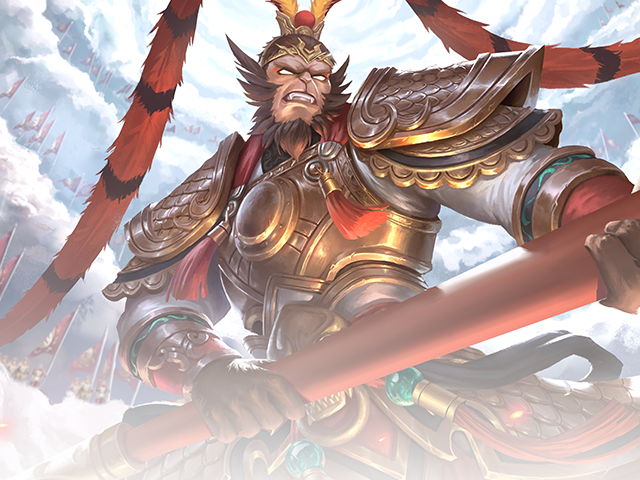 World was in harmony and creatures started to thrive. In this very time, there was a divine stone that contained the essence of the sun and the moon.

The stone monkey used the name of Sun Wukong to complete the goal and elixir.

As Sun Wukong was just out of the stone, he was too pure to know about himself with his Vipassana under the state of "no entity"; however, as he grew up, he knew more of the world and thus gained a deep insight of "the entities" in the world.

People who could achieved these two states were bound to make a huge success since time immemorial.

In order to get rid of reincarnation, he bid a farewell to his monkeys and became a student in Fangcun Mountain in Xiniu.

Monsters all obeyed Sun Wukong respectfully and his name spread through the continent. He crossed off his name in the notebook recording the life and death of every living thing.

He was so arrogant that even the Jade Emperor could do nothing about him. Therefore, the Jade Emperor appointed him as an official that took control of the horses to comfort him. However, Sun Wukong was unsatisfied with this trivial title and named himself Great Sage Equalling Heaven.

He got his eagle eyes by hiding in a furnace, coming and leaving without a trace on his somersault cloud.

Sun Wukong rides on the Somersault Cloud and dashes toward the target, dealing 750/900/1050/1200/1350/1500(+81% Attack Power) damage and causing 64% Movement speed Reduction to enemies along his way, lasting 1.5 second. Using this skill during the period of [Havoc in Heaven] can change the direction he is dashing toward immediately and stack up the damage caused

Sun Wukong swipes his golden cudgel and launches 3 attacks to nearby enemies, dealing 300/450/600/750/900/1050(+64%Attack Power) damage each time. Each attack is regarded as a Basic Attack and can trigger special attack effects such as Rune and Card. The last attack can knock back the dead ahead enemies for 0.3 seconds. Using this skill during the period of [Havoc in Heaven] can knock back the enemies collided within 3 seconds, dealing 360/460/560/660/760/860(+36%Attack Power) damage and the knock-back effect lasts for 0.3 seconds

Sun Wukong becomes unstoppable and rushes straight forward. He launches charge right forward and during this period, he is immune to control and can change the direction by the controller to some extent,swerve with a jerking motion when hitting the Enemy Heroes or obstruction. Dealing 360/540/720(+81%Attack Power) damage and knocking back collided enemies, lasting 3/4/5 seconds. Cooldown time of [Somersault Cloud] and [World Peace] will be reduced by 1 second if he collides one enemy hero and also the charging time will be extended by 0.5 second, up to 7/8/9 seconds During the period, Sun Wukong cannot launch Basic Attack and can end the skill in advance by casting again.