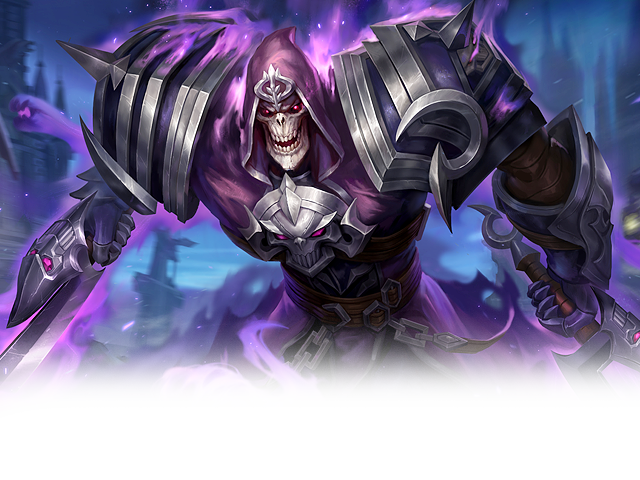 Thanatos, the God of Death, and Hypnus, the God of Sleep are twin brothers, but the two of them have different characters. Hypnus is gentle, while Thanatos, on the contrary, spreads fear to wherever he goes.

In fact, Thanatos was only indifferent, and lonely. Day after day, he had kept sending the souls of the dead to the Underworld, until one day her met Sisyphus, the son of the God of the Wind. This cunning man played a trick and trapped Thanatos, who was later released by Ares. After that, the indifference in Thanatos changed into cruelty.

Now he uses a scythe, the symbol of death, as his weapon. When the everyday night falls, Thanatos fades into the mortal world silently to reap his targets. No one can tell what’s lying beneath that cloak, as death always arrives before they can figure it out.

Thanatos performs 3 slashes in a cross,dealing 90/140/190+(0.4ap) damage each,plus an additional damage to the enemies in the cross point. Fill up [Shadow Energy] when killing an enemy hero.