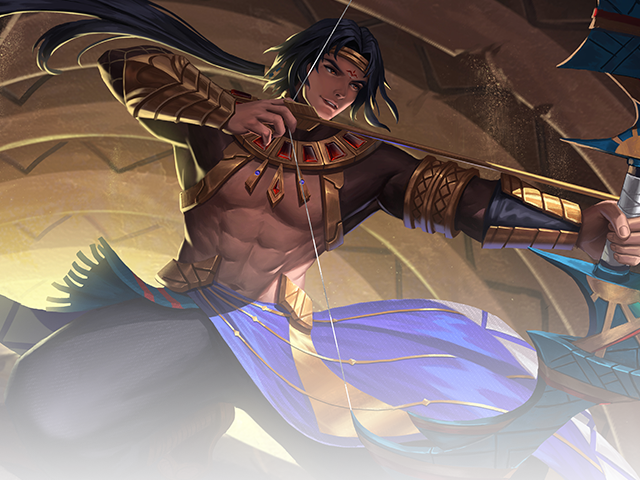 Arjuna was born in Hastinapur. As a prince, he possesses a strong sense of responsibility, a deep solicitude for the people and outstanding combat skills. For his whole life, he had been guided by Ishwara, and legend had it that he was the incarnation of Indra.

Favored by fate, he obtained thousands of treasures, of which the most famous one was Gandiba, the divine bow crafted by Brahma. With 100 perfect dots and 1000 golden hooks on it, this legendary bow is larger than any other weapons in the world. It can help its owner stop any army or capture any country. In the face of its everlasting beauty brought by the countless colors, even the gods must kneel.

Using the power of Gandiba, Arjuna defeated every enemy in his way with the endless rain of golden arrows, becoming the invincible one in Trailokya.

Normal attack against Heroes grants 1 stack of [Blessing]; Each layer increases Attack Speed by 2(+0.3*Lv)%, lasting 5 seconds, stacking up to 10 times. Remove only 1 stack whenever the duration is over.

When activated: Draw the bow, increasing range by 1.5 meters; Every normal attack consumes 40 Mana, inflicting [Elapse] on the target, lasting 1.5 seconds, during which the target loses 15/20/25/30/35/40(+0.05ap) Health every 0.5 second; Reduce Arjuna's Base Movement Speed by 30, increase his attack interval slightly, and ban him from restoring Mana by using [Golden Arrow]. When the skill is deactivated, there will be a 6 second Cooldown.

Shoot a sealing arrow. When it hits a Hero or reaches the furthest, deploy a seal that lasts 4 seconds. When enemies go across the seal, deal 140/200/260(+0.5ap) damage and reduce their Movement Speed by 99%, lasting 1.5 seconds; The first hit Hero additionally takes the same damage and is stunned for 1.5 seconds. Upon every Hero hit, Arjuna gains 2 stacks of [Blessing].