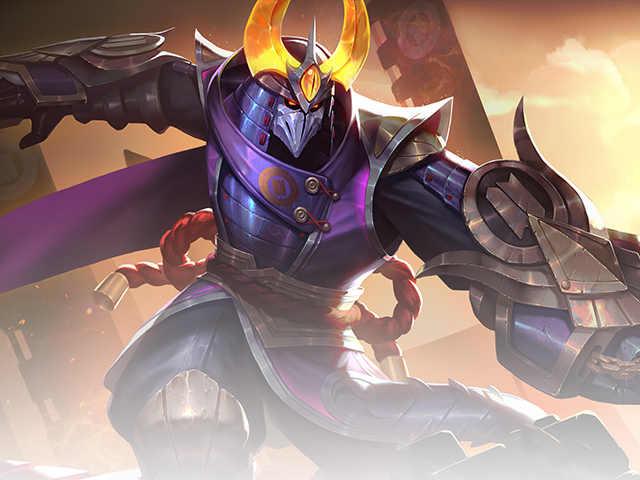 Hanzo doesn't refer to a person's name, but to the leader of ninjas, and it is the hereditary title of the Hattori family. The most famous one is the second-generation Hanzo, Hattori Masanari.

It is rumored that he can completely hide his whereabouts on a mission, and that he can even walk on roofs and walls. His speed is so fast that the afterimage makes him seem to show up in different places at the same time.

When in the bush or close to the terrain's edge, Hanzo increases Movement Speed by 10%, ignores obstacles and gradually turns invisible in 2 seconds. Invisibility will be removed in 1 seconds since Hanzo leaves the terrain, or after Hanzo uses Basic Attack or Ultimate Skill, or after Hanzo receives Ability Damage.

Throws a hook towards the target which drags Hanzo to the target's place when it hits an enemy or the terrain. Can store up to 2 hooks. Deals 150/190/230/270/310/350(+100% Attack Power) Damage to the target and immobilizes it for 0.5 seconds if an enemy is hit; Immediately enters the state of [Track Destruction] after moving if a terrain is hit.

Appears behind the target enemy and immediately launches a Basic Attack, then enters the state of [Track Destruction] within 0.5 seconds, which will not be disabled by leaving the terrain or receiving Damage within 1 seconds. The skill can be used again within 4 seconds.

Gets the View of all enemy Heroes, lasting 8 seconds. Can use the skill again to attack a specific enemy Hero within 8 seconds, rushing to the back of the Hero and dealing 200/350/500(+100% Attack Power) Damage. During Tenchu, this Ability Damage will be increased by 20% every time you use Basic Attack on the Hero. Obtains double Exp when using the skill to kill a Hero.