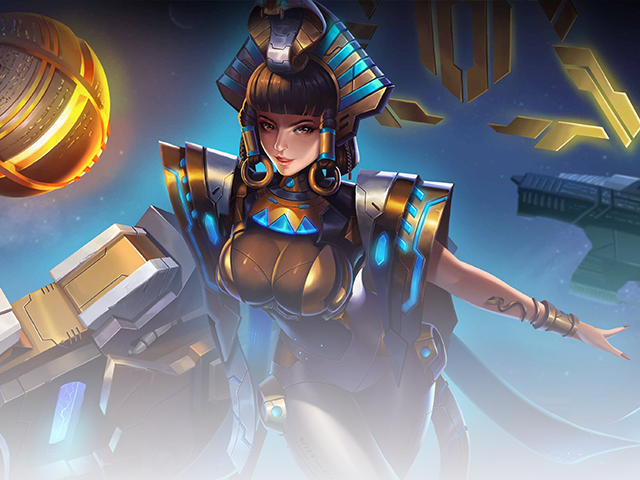 Nute is known as Mother of the Stars and the Goddess of the Sky. This kindhearted deity has countless believers in both the human world and the underworld as she grants her love to both the living and the dead equally.

But that is, actually, only part of her benevolence. As the one who gave birth to all stars, she is responsible for keeping their motion. Everyday at the same time, she loads her "Star Cannon" with the stars that are back to their starting point after circling in the universe, and shoots them out again so they can start a new lap. In the morning, she shoots the sun to warm the human world; When the night falls, she shoots the moon to pacify the underworld.

Once the goddess found that mysterious Spacetime Singularity where the sun, the moon and the stars were frozen. To look deep into it, she went there herself carrying the "Star Cannon"...

Shoots a shining star to the target area, dealing 130/160/190/220/250/280(+90%Attack power) damage to enemies within range and gaining View of the area for 2 seconds.Shining Star inflicts a mark on the hero in the area; Nute gains View of those heroes for 4 seconds and every Basic Attack against those heroes increases Nute's range by 70 and damage by 10%, lasting 3 seconds or until Nute switches her target.

In a while after the skill is cast, Nute shoots a giant neutron star, dealing 150/250/350(+100%Attack power) damage to all enemies on the route and knocking enemies hit within 6 meters back to 6 meters away.