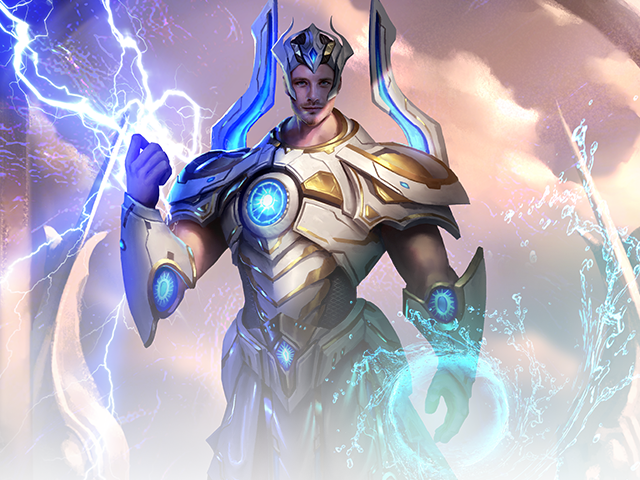 Tlaloc is the God of Rain, Thunder, Drought, Flood, Hail， and Storm. As his sister Chalchuhtlicue, he is also the third deity who has become and masters the sun.

Before the terrible conspiracy happened, he was a mercy sovereign who rained the plants and earth. However, the plot broke his spirit. Within great sadness, he was not in the mood to work. That made earth run dry for lacking rain.

So people continued to pray for rain, and at last, Tlaloc responded to their pray by raining the firestorm. People were turned into birds and saved by Chalchuhtlicue, but Tlaloc's anger can never be stemmed.

If Tlaloc's abilities hits enemy units, the cooldown of [Hurricane] is reduced by 0.2s (1s against Heroes).

Tlaloc launches a core of whirlpool in a target direction, which explodes upon recast or hitting an enemy hero, dealing 500/700/900/1,100/1,300/1,500(+80% Attack Power) damage and knocking up nearby enemies for 0.8s. If the core flies through [Hurricane], the core's explosion radius and speed are increased and deals 40% extra damage

Tlaloc launches a hurricane in a target direction, dealing 75/150/225(+10% Attack Power) damage per 0.25second to nearby enemies. The hurricane remains for 7s. Recast [Hurricane] to move it at the target direction.